RecyclerView is an Android type of view designed to display many similar items. By using a pool of ViewHolders of different types that hold references to individual views on the list, the component is able to display hundreds and thousands of items without performance problems.

Despite these features, our implementation, especially its first iteration, may not be optimal and cause various undesirable effects such as slight freezes during the view scrolling.

If performance issues are encountered, the first step we can take is the time analysis. What interests us is how much time the UI thread spends in two main methods of our own implementation of the androidx.recyclerview.widget.RecyclerView.Adapter. Namely, in the onCreateViewHolder() and onBindViewHolder().

While the first one is used to build a view, most often from a layout in the form of an XML file, the second one is used to fill the view with dynamic values. The more time the UI thread spends in one of these methods, the worse the scrolling smoothness will be. We can assume that anything greater than 16ms will be an indicator of problems with maintaining 60 FPS.

The first thing worth considering is the hierarchy of views in our layout. A deep hierarchy of views will often prevent the measurements from finishing calculations in a single iteration. This problem is described in more detail in the official documentation for developers of Android applications. The concept is quite simple and you will also find some useful tools there to cope with the problem.

The second fairly common cause of UI freezes is the image loading and display. Without the use of proper libraries that facilitate this process (Glide/Picasso), you should at least consider the downsampling. You should display the image in a quality that matches the size of the view (usually lower quality). This will allow you to reduce the resource use of the mobile device.

The method is described in the documentation and it can be applied both to images loaded from application resources and byte arrays. For example, displaying an image with resolution 1024 × 1024 px in a 72 × 72 px view can result in a reduction of the memory usage from 4 MB to 0.02 MB, as well as CPU time.

What's more, using a dedicated library greatly simplifies the implementation. Downsampling is usually built-in. Additionally, we get a cache implementation, and the icing on the cake is the often built-in animation interface.

When our layout provides a view expand feature (e.g. to display details), a particularly adequate solution is the ViewStub choice. This type of view is characterized by the fact that initially, it does not take up any space in the UI, quite similar to the attribute View.GONE.

In the case of the View.GONE attribute, when the view is inflated, child views are as well (if it is a ViewGroup with children). ViewStub, on the other hand, allows this process to be delayed until we need to display (View.VISIBLE) the view.

This is ideal if we display the views in a collapsed state by default. Using ViewStub will save us valuable milliseconds during the onCreateViewHolder() method. In exchange, we trade this for a slightly longer view expansion time. Inflation of the target layout specified by android: inflatedId occurs when we call the inflate() method or when we set the visibility to View.VISIBLE or View.INVISIBLE.

In other cases, when our ViewHolder is quite complex and always displayed in full form, using AsyncLayoutInflater might be a lifeline. The idea is to initially create some simple view (a placeholder) that requires a minimal amount of time to inflate, potentially reuse it, and in the background delegate the construction of the complex layout to an asynchronous process. Finally, upon completion of the build, by calling a method with the logic we normally put in onBindViewHolder(), we replace the contents of the original view.

While it sounds salutary, in practice it is not so straightforward. The process has several conditions:

For a layout to be inflated asynchronously it needs to have a parent whose generateLayoutParams(AttributeSet) is thread-safe and all the Views being constructed as part of inflation must not create any Handlers or otherwise call myLooper(). If the layout that is trying to be inflated cannot be constructed asynchronously for whatever reason, AsyncLayoutInflater will automatically fall back to inflating on the UI thread.

Personally, when using asynchronous inflation, I had experienced problems with the correct application of attribute styles. In particular, instead of image buttons empty spaces were displayed to me in place of icons. 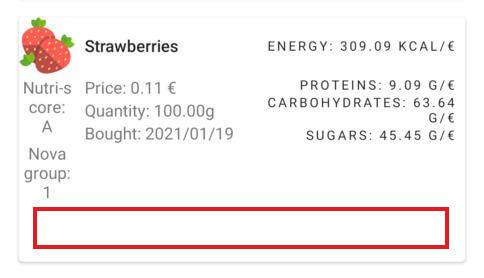 After adding time logs to the onCreateViewHolder() method, you will surely notice that additional ViewHolders are created as you scroll through the list. Often during faster scrolling, you will encounter some freezes as the UI thread will be busy building additional holders. Fortunately, we are able to adjust this process slightly.

One way to improve the scrolling smoothness is to pre-inflate more ViewHolders that we initially need during the initialization of the layout. The delegation of ViewHolders inflation based on the screen measurements and scrolling is managed by the layoutManager property (RecyclerView.LayoutManager) of the RecyclerView class.

The default implementation of this class is the LinearLayoutManager. Overriding the getExtraLayoutSpace() method, allows us to define how much additional, off-screen space will be used to inflate the views.

It's worth noting that this method is marked deprecated and we should actually override the calculateExtraLayoutSpace() method. Some parts of the new method, however, are based on a private state of the class, and it's hard to cleanly reproduce the logic. Fortunately, the new method still calls the getExtraLayoutSpace() thanks to backward compatibility, so we shouldn't worry too much about it as long as it's not removed.

Without overwriting, extra space is only returned when scrolling to a defined place (assuming that the isSmoothScrollbarEnabled() flag is set to true, which is the default). When scrolling by hand, the method returns 0.

Sometime after the initialization, we should reset the value of the extra space. The ViewHolders built in this way will remain in the cache and during scrolling will be reused without freezing the main thread resulting from onCreateViewHolder().

If we use animations that include collapsing and expanding views, or drawing pictures, it is worth leaving some space here, as in the example. You might find this fixing some unwanted behavior caused by view boundaries.

The last thing from which we can gain valuable milliseconds is the view-building process itself. In the beginning, we will probably use layout inflation from an XML resource file. Despite the fact that the framework implements some preprocessing of layout definitions (which is why it's hard to build a layout from your own XML file), it is still not the most performant method.

Inflation through the LayoutInflater involves the use of a reflection. As you may already know, the reflection adds quite a bit of overhead. We are able to reduce it by creating a view programmatically. In this case, however, we should consider whether its pros and cons. In my opinion, future maintenance is easier with an XML layout.

From experience, I can say that we can save an average of 2-4 ms on the construction of a simple layout consisting of a group of 4 text views using the software structure. This is, of course, a subjective observation, just to get a general feeling. The previously mentioned solutions should give better results.

In case of problems with smooth scrolling of the RecyclerView view, it is worth focusing on several aspects: simplification of the layout hierarchy, asynchronous loading of the images and caching, using the ViewStub or asynchronous inflation using AsyncLayoutInflater, and lastly, you may consider moving to programmatic inflation. If the problems are not resolved after applying all these tips, the next step may be to analyze the application using the CPU/GPU profiler.